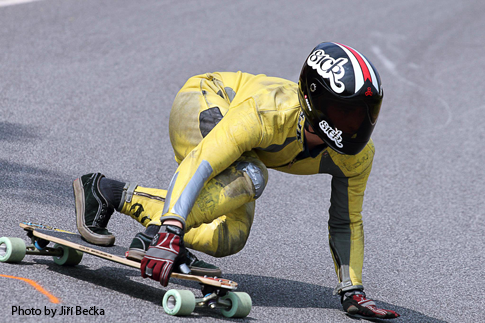 
Zen Shikaze from Vernon, Canada finished second.  Shikaze is making his first tour of the European circuit and is definitely stoked to have earned a podium finish.  Sebastien Hertler from Germany earned his first World Cup podium by finishing third.  Canadian Dillon Stephens was fourth.

Rain played a big factor in today's race and it was those who rode more conservatively and also had some luck who prevailed. Prior to the Semi-Finals the track was soaked by a torrential downpour.  The extremely high speeds of the top and bottm sections of Kozakov make it too dangerous to run in the rain.  A meeting was called by the IGSA Officials and collectively with the riders it was decided to shorten the course by moving the start lower and the finish higher.  All the riders had already made the switch to rain wheels.  Apprximately 45 minutes had elapsed since the downpour and the road began to dry.  The riders were called to the line but semi-finalist Patrick Switzer could not be found.  After several minutes of searching, the officials could not wait any longer since the attending physcian was threatening to leave which would have forced the cancellation of the race.  The semi's were run without Switzer.  He turned up a few minutes later and explained that he was switching back to dry wheels.  Switzer came back for the Consolation Final where he won and was credited with fifth place.

Bouaich is now the fourth different winner in the four World Cups that have been contested so far this year.  The other winners were Alex Tongue at Mt Keira, Mischo Erban at Newton's Nation and Patrick Switzer at Maryhill.

Abdil Mahdzan scored his second World Cup victory of the season in wet conditions at today's Kozakov Challenge.  The victory also marked Mahdzan's third visit to the podium in as many races after winning at Mt. Keira and finishing third at Newton's Nation earlier this year.  Mahdzan is now in a strong position to earn his first World Cup Series Championship.  Last years World Cup Series Champion Yvon Labarthe from Switzerland finished second.  Peter Eliot from the United Kingdom was third and Michael Muller was fourth