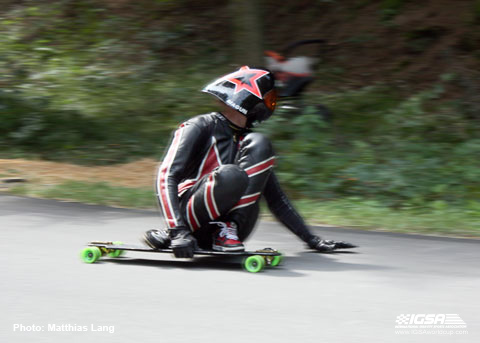 Semily-Kozakov, Czech Republic - Under perfect, dry conditions today, Christoph Batt earned the number one qualifying position for tomorrow's Kozakov Challenge Final Eliminations.  Batt posted a time of 2:24.914 that sent him to the top of the timesheets.  The times were nearly three seconds faster than yesterday when there were still damp patches on the road from rain the previous night.


Yesterday's qualifying leader Patrick Switzer crashed out on his second qualifying attempt and dropped all the way down to 19th.  Douglas Silva showed the consistency he's displayed all year with a run of 2:24.940 the shot him all the way up to second.  The Brazilian has already finished twice this year and was the winner of last years final race in South Africa.  Nicolas Robert put in a solid run for the second day in a row and moved up one spot to third with a time of 2:25.227.  James Kelly showed his mastery. 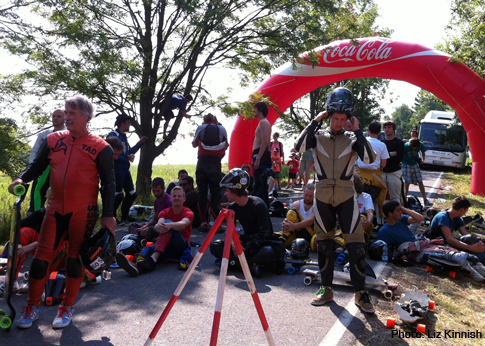 Riders relaxing before the start of the second qualifying run.

of Kozakov with a time of 2:25.595 to qualify in fourth position.  Kelly has been fast and consistent all year after committing himself to downhill racing this year. His first ever World Cup victory seems immimemt.  Kevin Bouaich made it three Swiss skaters in the top five with his run of 2:25.766.  Yesterday's Junior II sensation Quinn Finnochio had a day he'd rather forget when he crashed on his qualifying run.  Tomorrow's race will be tight with this extremely talented field of riders.  Less than one second seperates the top 14 skaters.  With some really fast riders like Switzer, qualifying outside of the top 16, you can expect to see some stacked heats early in the race.

The first 60 starting positions are locked in by timed qualifying.  This afternoon a "Repacharge" or last chance qualifier was held for those who qualified in positions 61-124.  Using a 64 rider bracket, they raced in 4-Up heats.  The final four race for starting spots 61-64.  John Barnett from Ontario, Canada was the winner.  Jaraslov Kejf from the Czech Republic was second, Simon Hasselberg from Norway was third and Andre Preto was fourth.  Those four skaters all earned a starting position in tomorrows Final Eliminations.