James Kelly Breaks Through For The Win!!! 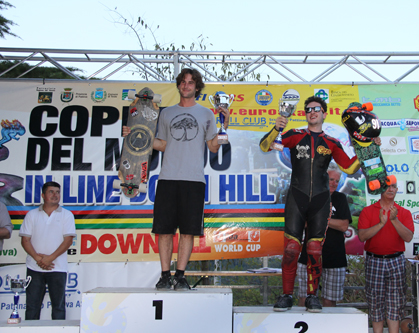 Teolo, Italy - James Kelly capped off a strong weekend at the Padova Grand Prix by winning his first IGSA World Cup race.  Kelly who hails from Petaluma, California, USA lined up in the final against number one qualifier Ramon Konigshausen, Douglas Silva and Luke Melo.  Kelly is known as one of the most talented longboarders on the planet but until today a World Cup victory had eluded him.

Earlier this year he said the focus of his year would be on racing.  That focus appears to have paid off in a big way.  Melo earned his first ever World Cup podium by finishing second.  It was a breakthrough result for the skater who hails from the Toronto, Canada area.  Douglas Silva finished in third giving him his third World Cup podium finish this year.