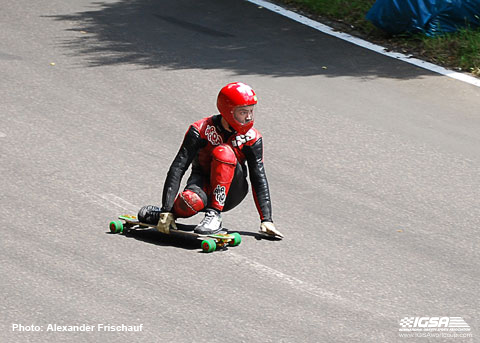 In the final he went up against #1 qualifier Ramon Konigshausen, 2009 IGSA World Cup Series Champion Mischo Erban and last weeks Padova Grand Prix runner up Christoph Batt.  Batt ended up finishing in the runner up position for the second week in a row with Konigshausen third.  It was a complete sweep of the podium positions for Switzerland.  Mischo Erban was still stoked to finish fourth after enduring a difficult season. 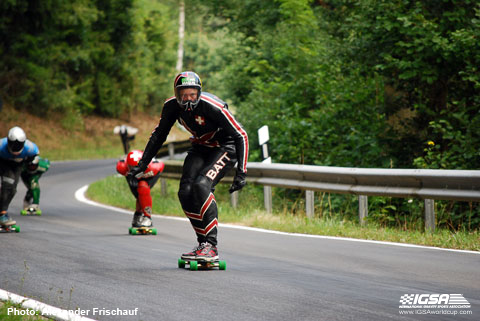 Christoph Batt finished in the runner-up position for the second week in a row.

The original schedule for the weekend had called for two qualifying runs on Saturday followed by the final race on Sunday.  The organizers had been watching the weather forecasts closely all weekend and Sunday's forecast was looking worse and worse.  Due to the highly technical nature of the Insul course, racing downhill skateboarding in the rain was not an option.  The decision was mde to forego the second qualification run and instead run the race on Saturday afternoon.

Since the event was being held the week between the World Cup races in Italy and the Czech Republic, a lot of top international racers were present in Insul.  In the early rounds there were a lot of top riders who were eliminated including Patrick Switzer, Douglas Silva, Sebastian Hertler, Dominik Kowalski, Jackson Shapiera, Scoot Smith and Stefan Ruefli.

Alex Dietz from Germany earned a popular win in the Consolation Final over Andrew Chapman, Boris Schinke and John Barnet.