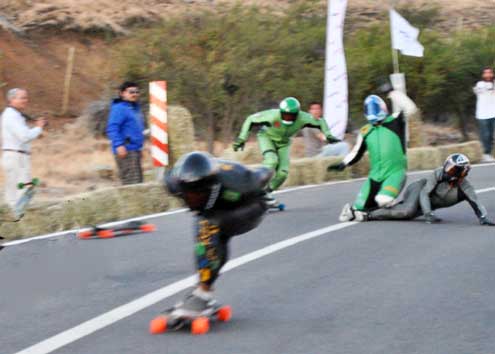 Finishing in second position was fellow Brazilian Douglas Silva. Silva was awarded second place after a highly controversial crash between he, Peruvian stand out Felipe Malaga and Alysson Garcia in the last corner during the final.

Silva led from the start followed by Ovalhe, Malaga and Garcia. As the riders approached the final two corners, Ovalhe passed Silva to take the lead. Silva was now second followed by Malaga in third and Garcia fourth. At this point Malaga made a daring pass on the outside of Silva for second position. As the two riders approached the final corner a surprised Silva had already committed to his line not expecting the unconventional pass. Malaga was rapidly running out of room on the extreme inside of the corner. Since Malaga was entering the final corner from the extreme inside, this meant that his momentum would carry him on a trajectory requiring a wide exit from the corner.

Inevitably Malaga and Silva bumped a few times before both of them ultimately crashed as they battled for the same piece of road. At this point Garcia rode around the outside of the two crashed riders and seemed to have second place in his grasp until he made contact with Silva who was sliding on the track. Garcia was launched into the air as his board was swept away from under his feet. He literally crossed the finish line airborne in second. Silva’s board rolled over the finish line on its’ own and shortly after Silva himself walked across the line as the third finisher. Malaga picked himself up, got on his board and rode over fourth. It was one of the most bizarre finishes in IGSA history.

IGSA Official Alexandre Maia was responsible to sort out the mess in the middle of a desert setting in darkness. After approximately 1.5 hours of reviewing various video tapes and photographs from eyewitnesses, listening to accounts from the riders and referring numerous times to the IGSA Rule book, Maia came to the following ruling:

THE FINISH: An official finish is when any part of the competitors’ body or equipment crosses the finish line. Racers must be in contact with their vehicle and have all safety gear in place when they cross the finish line in order to earn placement. A racer who proceeds down the track without all pieces of safety gear in place will be disqualified.

Silva walked across the finish line third but was also not in contact with his skateboard. Like Garcia, he was also classified as a DNF. Malaga was the fourth rider to cross the finish line riding his board. Since both Garcia and Silva were classified as DNF’s Malaga was the second rider to finish the race. After careful review, the IGSA Official Maia determined that since Malaga had been the one who instigated the entire incident with his daring pass of Silva, he was responsible. Malaga was disqualified and moved to fourth in the final results. Since both Garcia and Silva had not finished the heat, their qualifying times were used to give their final placement. Since Silva qualified higher than Garcia, Silva was credited with second place and Garcia with third.
IGSA Official Inquiry
The ruling was highly controversial with some feeling that IGSA Official Maia had made a bad call or even worse, a call that was biased toward the Brazilian skaters since Maia is a Brazilian citizen. The message boards lit up and IGSA President Marcus Rietema received numerous emails about the incident. At Alexandre Maia’s request, Rietema was asked to review the video and photos to see if he had made the correct ruling.

After carefully reviewing all of the evidence, the committee came to the following conclusions:

1. Who instigated the crash? In our view the crash was instigated by Malaga taking a risky line. It's hard to see who was first going into the chicane, but we assume from the various commentary that it was Silva, with Malaga approaching from behind with greater speed. None of the accounts dispute that Malaga came from behind and went for a pass. Malaga spotted the slot and took a chance. It is possible Silva could have created space for Malaga to pass, but it was his prerogative not too as he had the proper race line. Thus, in our view the crash was ultimately caused by Malaga going for a difficult and, as it turned out, unmakeable pass.

2. Was the contact involved egregious?
a) Was Silva pushing Malaga with his shoulder? While at first glance of the photos this argument appears plausible, our impression from the video is it shows Silva wobbling as Malaga passes him, in our view this is due to contact between the riders putting Silva off-balance. It does not appear to us that Silva is actively pushing Malaga with his shoulder. We think the reason the photos give this impression is because Silva is off-balance and simply leaning to make the turn. Silva appears keen to keep his line and does not give Malaga any extra room. This is within Silva’s right as he is on the better line. Additionally, we don't think there is any indication from the photos/video that Silva intentionally used his hand to push Malaga's board. Silva's hand is on the nose of his board.

(b) Did Malaga push/pull with his hand? Again, similar to (a) above, we don't believe the evidence conclusively shows Malaga pushing Silva. We think it's a simple case of putting his hand out to "create" some space for himself in a tight situation. We think it's a long stretch to conclude Malaga was pulling/pushing Silva on purpose and believe this is a result of putting himself in too tight behind Dalua and the shoulder of the road.

Conclusion: Neither rider's contact during the pass was out-of-line or unsportstmanlike. Malaga's pass may have been somewhat reckless but we don't believe he intentionally wanted to or caused Silva to crash.

3. Results: How do the above observations affect the results? We unanimously agree that Alexandre Maia made the correct ruling and that the final results should remain unchanged.

4. Final Thoughts: By all accounts it was a very challenging situation. There may be instances where foul play is obvious. In these situations action should be taken. However, there is in our opinion too much gray area in these events to make a fundamental conclusion other than that the crash was probably more Malaga's fault than Silva's fault. Additionally, riders need to realize they are skating in underfunded and, unfortunately, at times unorganized, events. The reality is there is little or no capacity for refereeing rider behaviour on a course, unless a marshall happens to see it. Riders need to step back from the situation and understand that in a situation such as this, there is no 100% correct answer.

We commend Alexandre Maia for the hard work he did of examining all the evidence under very difficult circumstances and ultimately making an excellent decision.
Teolo World Cup
Big Air Street Luge
2002 Big Air History