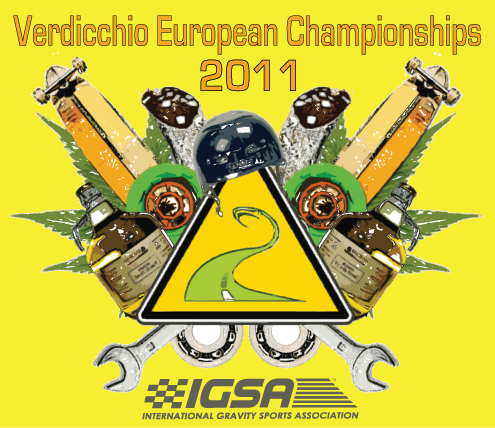 Shapiera claimed the pole position with a time of 3:07.169. Qualifying in second place was Ramon Konigshausen with a time of 3:07.755. Konigshausen has been a strong qualifier at each every IGSA event he has entered this year but has been winless since his victory at the Maryhill Festival of Speed in early July. He would definitely like to add the 2011 European Downhill Championship to his racing resume tomorrow.

Qualifying in the number three position was Max Ballesteros with a time of 3:09.876. It was an impressive run for the Brazilian who is spending his first summer racing overseas and has been showing continual improvement at each event. Sebastian Hertler ended up in the number four position with a time of 3:10.053. The German racer is still looking for his first big win and he is definitely a threat to get it today.

Rounding out the top five was Nicolas Robert. The Swiss rider is showing a lot of consistency this summer and should put in a strong showing on Sunday. Sundays race will feature a 96 rider bracket with 6-man heats. It will mark the first tiime 6-man heats have ever been used for an IGSA sanctioned competition in Europe.