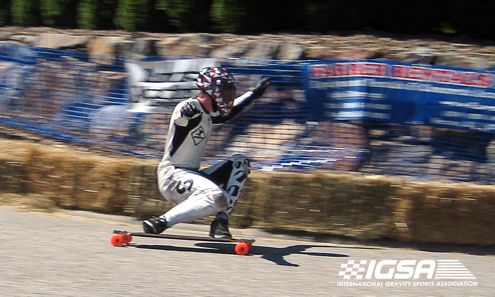 Vernon, BC, Canada- Reigning World Champion Kevin Reimer laid down a scorching first run of 55.094 seconds to earn the number one qualifying position for tomorrow's Vernon Downhill/IGSA North American Championship.  Local Zen Sakazi turned in the fastest run of the second round with a 55.252 to earn the number two spot.

Douglas "Dalua" Silva from Brazil held the fastest time for most of the first run with a 55.693 until Reimer took the pole.  The top three skaters were the only ones to break into the 55 second range.  All three skaters broke Mischo Erban's year old track record of 55.964.

Speaking of Erban, he didn't have his best day.  Mischo is the organizer of the Vernon race and has spent the last week working day and night to prepare for the event.  He skipped all of the morning practice runs.  His first run down the hill was his qualifying run and he turned in a very respectable time of 57.037.  On his second run he simply overcooked it in the sharp left hander and went into the bales. His first run time was good for 11th overall.  Look for the defending IGSA World Cup Series Champion to put in a strong performance in tomorrow's race.

Riley Harris put in a really strong performance with a time of 56.441 to qualify in the number four spot. Australian Adam Yates turned in his best ever IGSA Qualifying performance with a 56.487 to earn the fifth qualifying position.  Scoot Smith endured two difficult qualifying runs crashing on both.  His best time was a 1:06.709 leaving him in the number 59 qualifying position.  It should be fun watching the 2008 World Champion carve his way through the field. 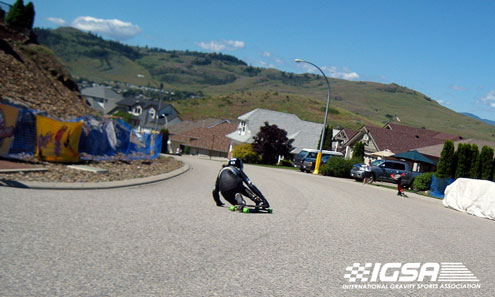 Brianne Davies at speed.  Photo Marcus Rietema
Two-time World Champion Brianne Davies was the number one qualifier in the Women's Downhill Skateboarding division.  Davies turned in a very impressive time of 59.411.  She was followed by Christin Gregerson in second with a time of 1:01.289.  Dominique Vukorep was third with a 1:03.431.  Katie Nielson ran into trouble and crashed on both of her qualifying runs.  Her time of 1:24.893 was definitely not indicative of the speed she was showing on the course.  When Brianne and Katie are in a race together, there almost always seem to be fireworks.  Look for a great race from the ladies tomorrow. 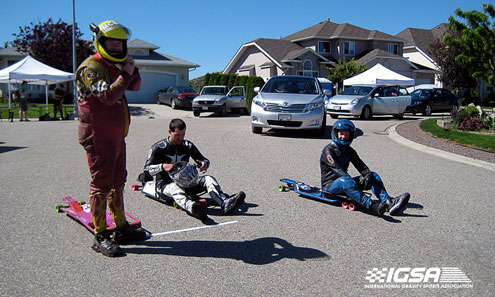 McBride, Parks and Condon Prepare for a practice run.  Photo Marcus Rietema
Kolby Parks from Toronto, Canada was the number one qualifier in both the Street Luge and Classic Luge classes.  In Street Luge he was followed by William Condon in second and Chris McBride in third.

In Classic Luge it was once again Parks setting the pace.  He was followed once again by Condon and McBride in second and third respectively.

As the day went on, it got progressively hotter.  When the second run took place the temperature was around 28C (82F).  After weeks of cool weather and rain in British Columbia, the weather was a welcome sight but also tested the competitors stamina.  Tomorrow's forecast is calling for more of the same making it critical for all the riders to drink plenty of fluids especially those who advance into the later rounds.