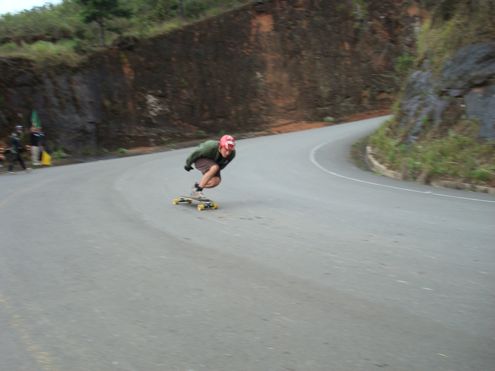 Brazil- We apologize for the delay in the second installment of the Hill Hunters Series. ESPN Brasil delayed the broadcast of the footage and we wanted this report to coincide with the video so we held it until it was released. We plan to publish Part 3 the week of December 8th.
Day Two: Destination Urubici- After a big breakfast, we left the Pousada and started the long drive to Urubici. What was supposed to be a five hour drive took nearly ten after a crazy series of events caused by the torrential rain that had washed out the Teutonia race. 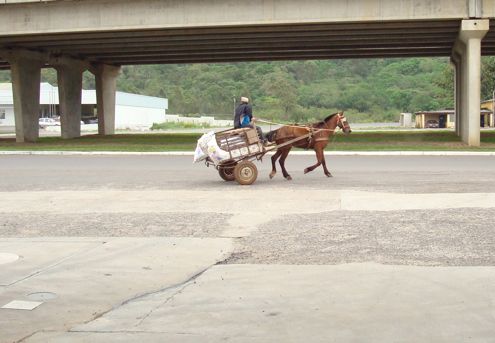 Horse drawn carts like this are a common sight in rural Brazil. Photo Marcus Rietema

The first four hours of our drive were spent driving along the coastal lowlands of Southern Brazil. Beautiful grassy fields and rolling hills dominate the countryside. We passed through many small towns along the way in an area where the economy is agriculture based. 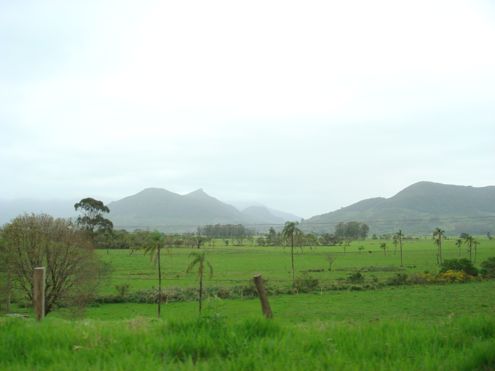 We traveled along the coastal lowlands for hundreds of kilometers. Photo Marcus Rietema 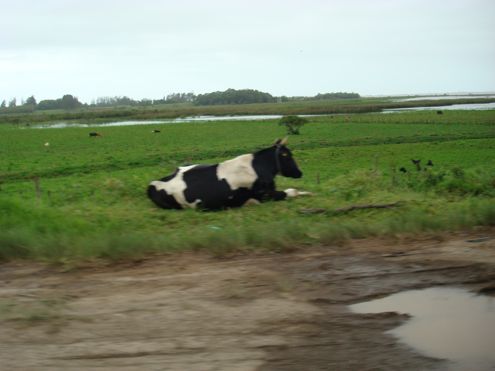 Cattle staked to the ground along the road are common. Photo Marcus Rietema

Numerous small towns like this were seen along the way. Photo Marcus Rietema

Eventually we turned inland to head toward our skate destination of the day. The incredible road of Serra do Rio do Rastro. Carved out of the side of a steep canyon, it is one of the most spectacular roads in all of Brazil. Everyone was excited to conquer it! Before heading into the mountains we made one last stop to stretch our legs, visit the toilet and top up on fuel.

We stopped for fuel before heading into the mountains. Photo Marcus Rietema 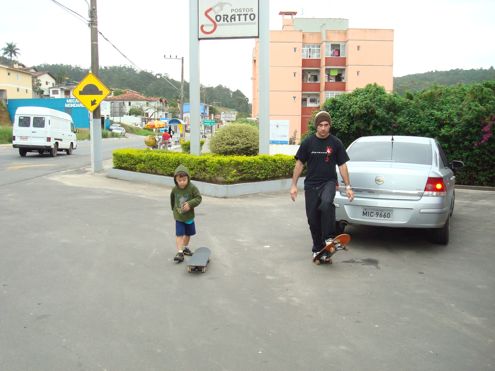 Juliano Cassemiro and his son Luca got in a quick skate. Photo Marcus Rietema 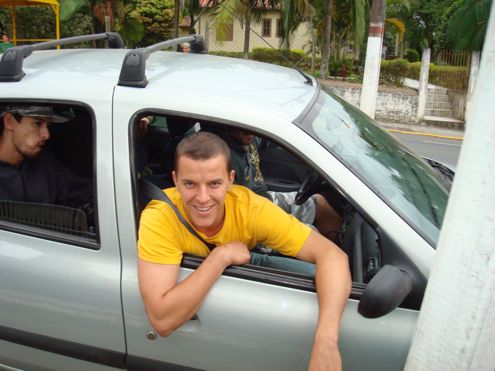 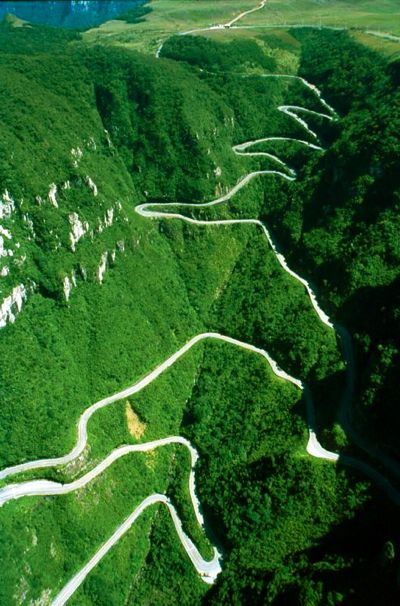 Serra do Rio do Rastro was our intended hill for the day. Unfortunately heavy fog made it unskateable. File Photo

Unfortunately, none of us ever got to see Serra do Rio do Rastro. As we drove up the road the fog just got worse and worse. Soon we could barely even see the center dividing line. Visibility was only about three meters (9 ft) and completely trecherous. The road is also so narrow that when a large truck is coming around a corner, the opposing traffic needs to wait because there isn't enough room to pass. Once we reached the summit, there was a snack bar where all congregated for coffee and snacks. Sadly, the Hill Hunters will need to wait until next year. 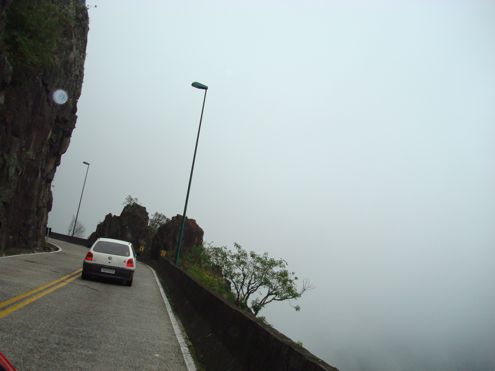 Heading into the fog. Visibility dwindled to around 3 meters (9 ft). Photo Marcus Rietema 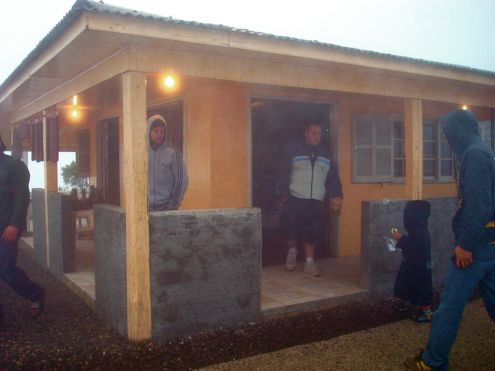 We stopped for coffee at this snack bar at the top. Photo Marcus Rietema 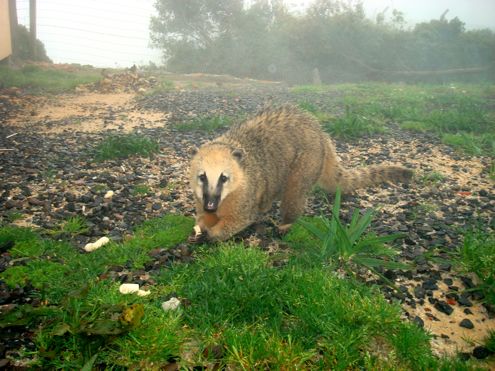 A Brazilian Raccoon having a feast. Photo Marcus Rietema

We were now at a higher elevation in an area known to have the coldest weather in Brazil. There were apple orchards everywhere in this area that even receives snowfall on occasion. Finally the fog lifted and everyones mood improved. The scenery was spectacular as we neared our destination of Urubici. It was only about 30 minutes away and it looked like we would arrive in plenty of time for dinner. 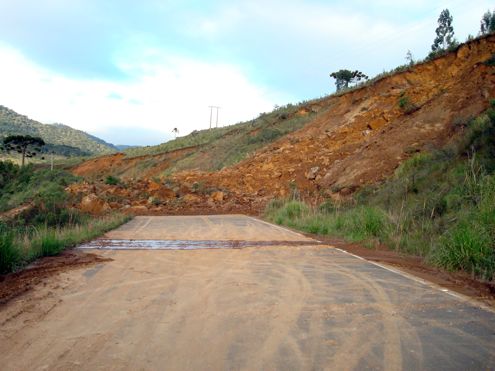 We were close to our destination of Urubici when we encountered this large mudslide. Photo Marcus Rietema

Sadly, the rains that had ruined the Teutonia World Cup had also created havoc throughout the state of Santa Catarina. We came across a massive landslide that completely blocked the highway. There was no way past it... We checked the map and it looked like we would need to back track about 200 km (125 miles). The group leaders decided to go back to the last town and see if there might be an alternate route.

With the highway completely blocked we had no choice but to find another route. Photo Marcus Rietema 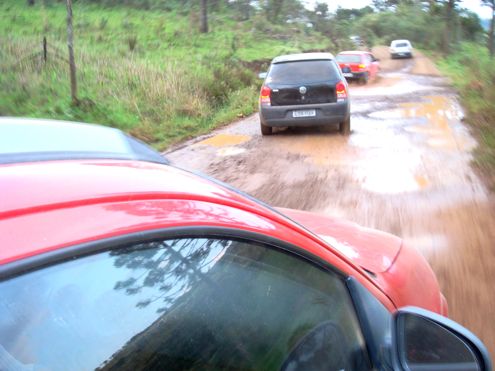 Our choices were a 200+ km detour or a poorly maintained alternate road. Photo Marcus Rietema

Some locals told us that there was a shorter route to Urubici over a "really bad road." Of course the Hill Hunters chose the shorter road. What else would you expect from a bunch of adrenaline junkies? The road went from bad to worse. Concrete bridges soon gave way to rickety, wooden bridges. Eventually there were no bridges at all. It was just a matter up putting the gas pedal to the floor and hoping you would make it to the other side! There were boulder strewn hills covered in loose gravel and pot holes. A jeep or four wheel drive would have been much more appropriate than our little economy cars. 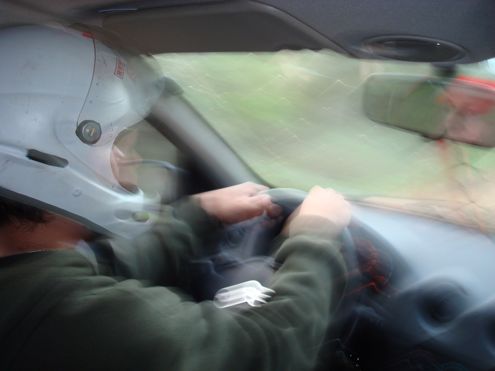 The road conditions were terrible. Henrique put on his helmet for fun. Photo Marcus Rietema 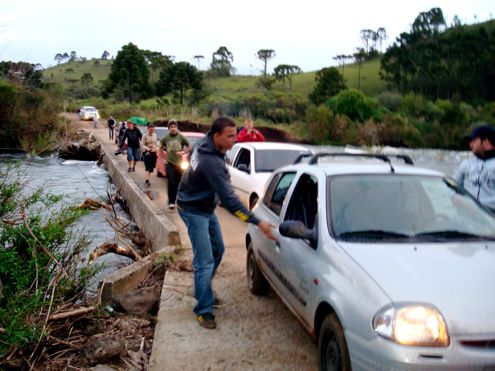 Everyone got out when we crossed this raging river. Photo Marcus Rietema 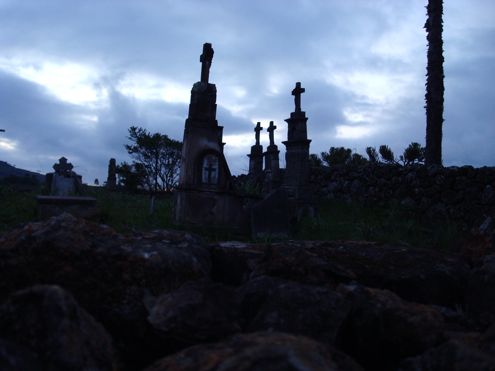 We came across this old cemetary with tombstones from the 1880's. Photo Marcus Rietema

Eventually darkness set in and we were still far away from Urubici. None of us knew exactly how far but we were seemingly in the middle of nowhere. We traveled on in the darkness for another hour until we finally reached the paved road. It was a mass celebration with everyone honking their horns wildly. After another 30 minutes we finally arrived at our hotel in Urubici. Amazingly we didn't loose a single vehicle. 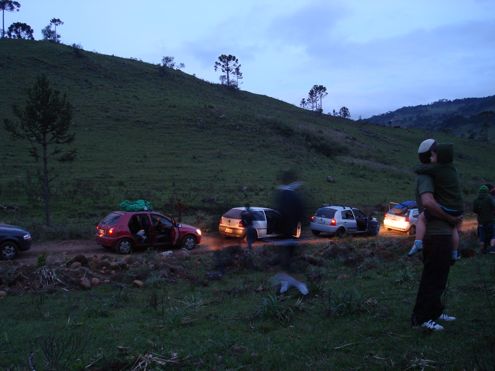 As darkness set in we were still hours away from our hotel. Photo Marcus Rietema 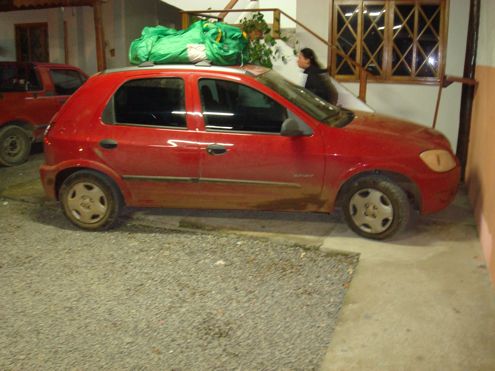 Finally we arrived at the hotel around 11:00pm. Photo Marcus Rietema 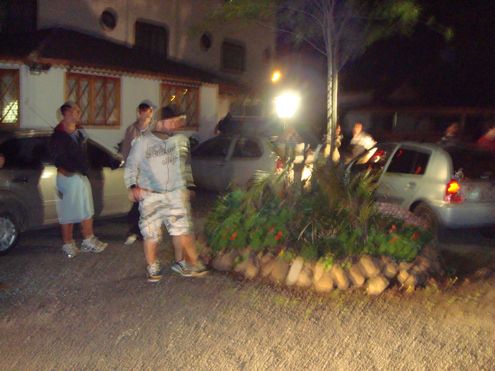 Everyone was amazed we arrived without losing a single vehicle. Photo Marcus Rietema

Day 3: More Rain in Urubici- The Urubici Park Hotel treated us to very nice accommodations. They were especially appreciated since the rain wouldn't go away. We were all hoping for better weather in Urubici and a chance to skate. That wasn't the case when we woke up to heavy rainfall. Once again our skating was washed out for the day. Ethan Lau, Bricin Lyons, Fabio Guimaraes and myself decided to spend the day walking around town. The locals were really suprised to see a couple of Americans and a Canadian walking around town. Fabio acted as our interpretor and we had a blast. 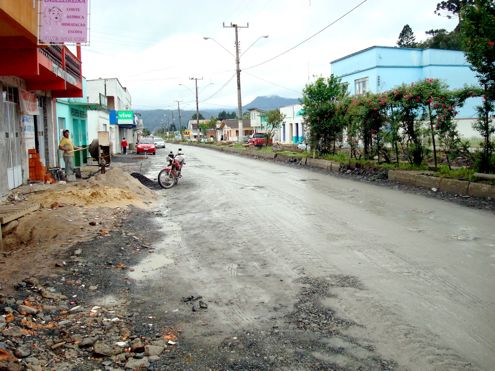 Downtown Urubici was torn up for renovation. Photo Marcus Rietema 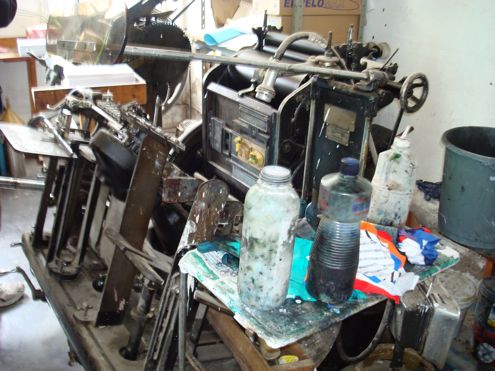 We visited a local printshop that was like a working museum. Photo Marcus Rietema 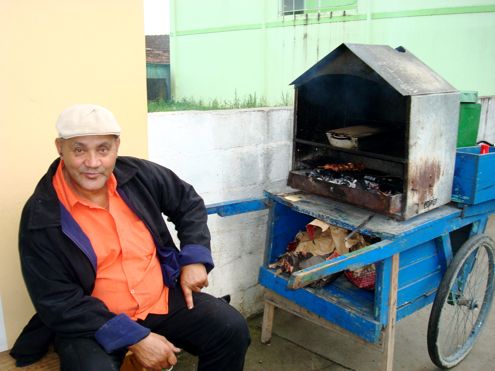 This vendor was selling skewers with chicken hearts and steak. Photo Marcus Rietema 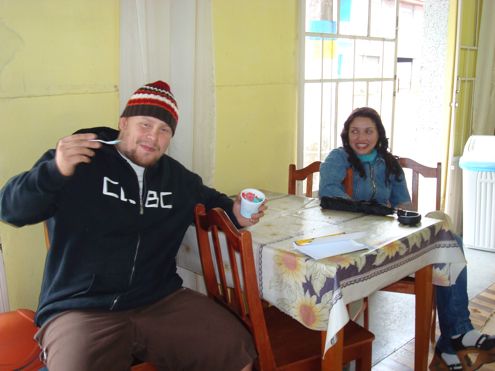 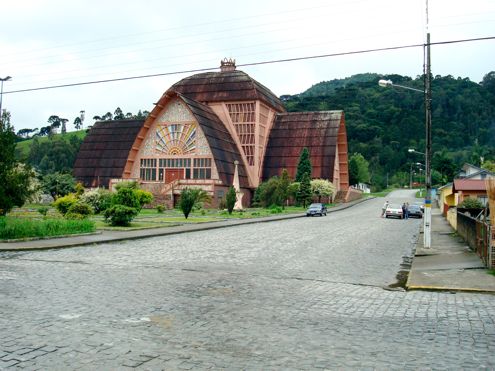 Day Four: Urubici Skate Session- Finally on day four the weather improved and the skate session was on! We used a stretch of road with a couple of hairpin corners connected by some long straights. It was open to traffic so we used spotters, flags and radios to keep the riders safe. Scoot Smith went down hard in one of the early runs injuring his shoulder and ankle. It spelled the end of his skating for the week. There were plenty of spectacular crashes but fortunately no serious injuries. Everyone was stoked to finally get a full day of skating in! 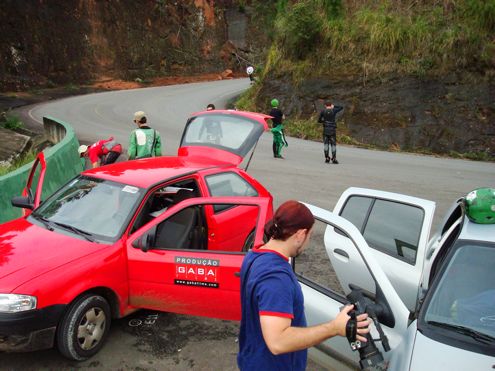 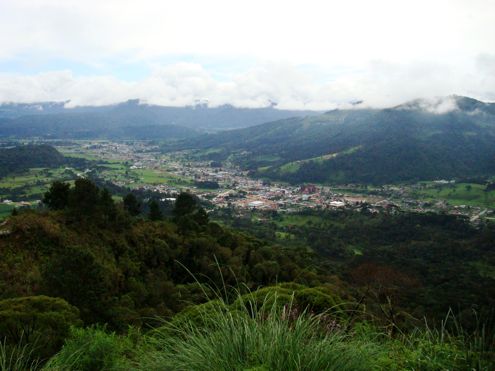 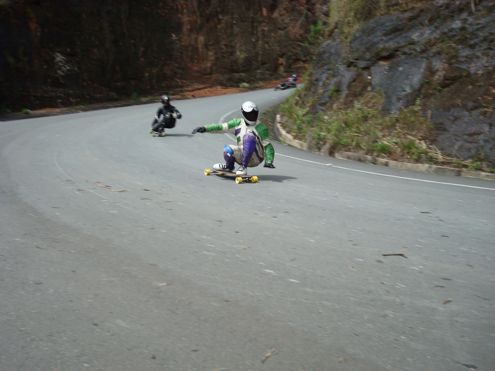 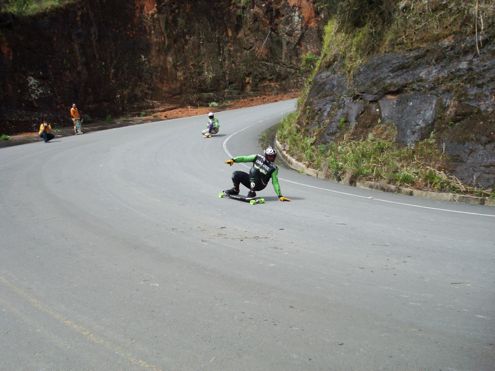 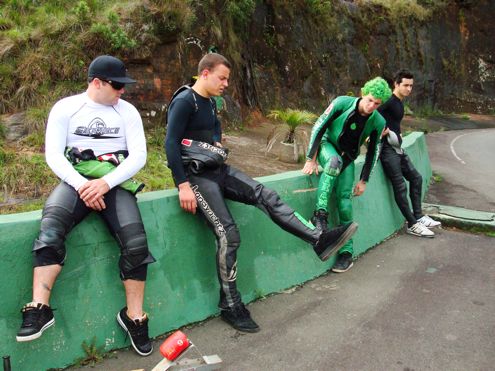 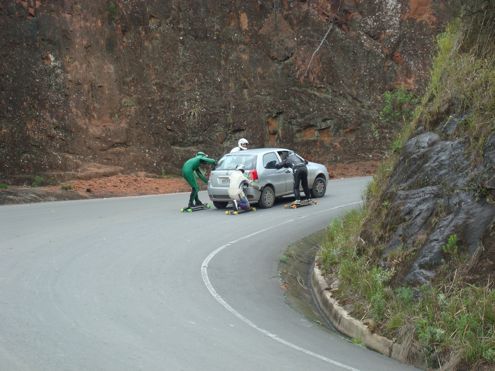 The skaters hanging on for another tow up the hill. Photo Marcus Rietema

Click on the EXPN Icon for Hill Hunters Part 2

Hill Hunters will conclude next week with the last three days of the trip and our final destination of Florianopolis...
Teolo World Cup
Big Air Street Luge
2002 Big Air History