Staub had not posted a qualifying time after missing his flight from Colorado on Saturday morning.  He had arrived at the track on Saturday afternoon about 15 minutes after qualifying had ended.  Without a qualifying time he was placed at the back of the field.  His apperance in the finals was accomplished the hard way against some very tough competition. 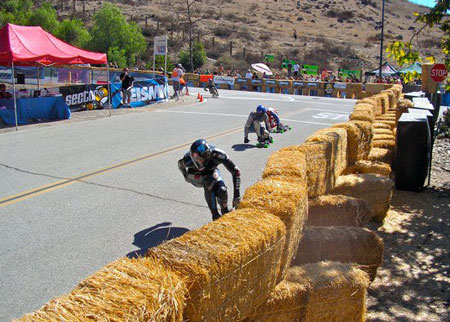 Mischo Erban leads John Rogers & Mike Snydor in the Semi Finals.  Photo Mark Golter
All four skaters left the line pushing hard.  Lundberg settled into the lead followed by Erban, Rogers and Staub.  They stayed single file like this through the Concrete Wave chicane.  As they headed toward Seismic Corner Erban appeared to take a cleaner, straighter line.  Lundberg made a quick foot brake.  Erban did the same but carried more speed into the corner.  Rogers was now also close behind Erban.  As they went through Seismic, Erban was clearly carrying more momentum and he committed to squeezing into a little gap between Lundberg and the straw bales on the outside of the corner.  It was amazing the two skaters didn't touch!  Rogers was unable to match the speed of Lundberg and Erban through the corner and ended up sliding into the straw bales.  Staub was sitting in fourth.  He was able to avoid Rogers and move into third position. 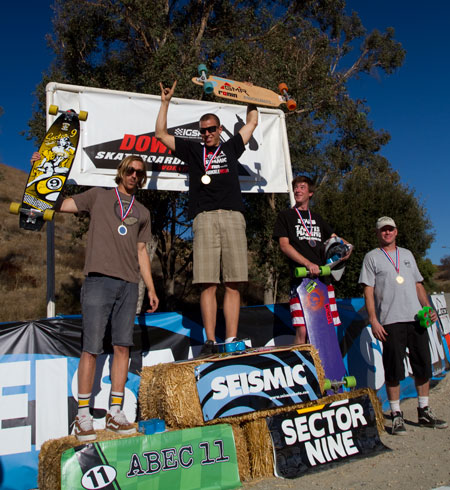 Open DH Skateboard Podium: L-R Lundberg, Erban, Staub, Rogers. Photo by Patrick Switzer
Lundberg and Erban were sided by side on the exit of Seismic and in a drag race on the long straight heading toward the finish.  Because of Erban's superior exit speed, he began inching ahead of Lundberg.  By the time they reached the finish line, Erban had pulled out a two board length advantage to earn his first win of the 2010 season.  Staub finished in third and Rogers was able to restart and finish the run in fourth.  Micah Green won the Consolation Final to finish fifth.  Erban Earned $500 for his victory.  As the highest finishing American, Calvin Staub was officially declared as the 2010 IGSA U.S. National Champion.  It was a very exciting ending to a great day of racing.

Chance Gaul was the winner in the Junior I Downhill Skateboarding class for riders aged 8-13.  Wyatt Gibbs finished second and Jake Fast was third.

Street Luge was won by John Rogers.  It was a really good day for Rogers with appearances in both the Skateboard and Luge Finals.  Brian Lee finished second and Kyle Castenada third. 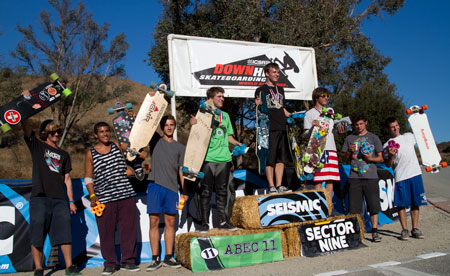 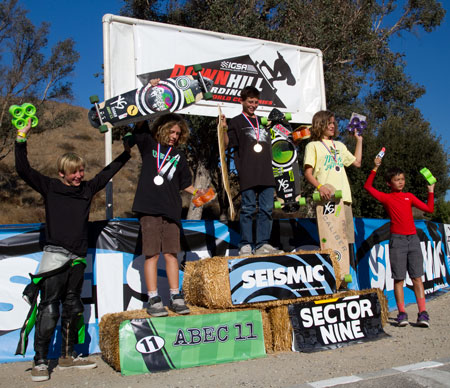 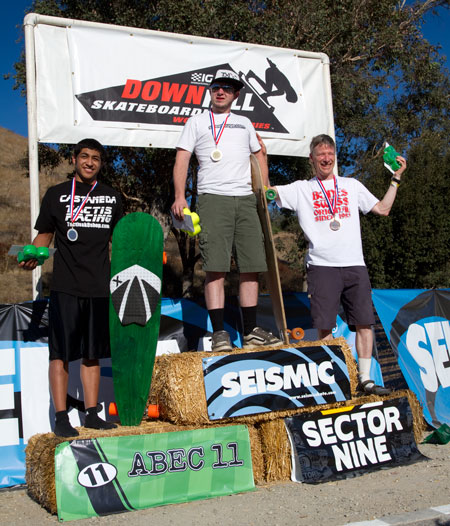 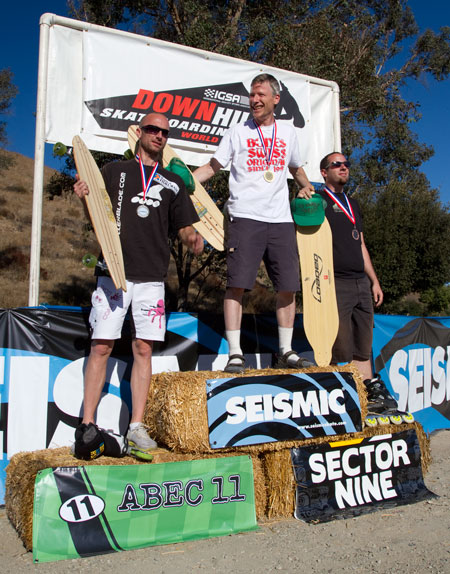