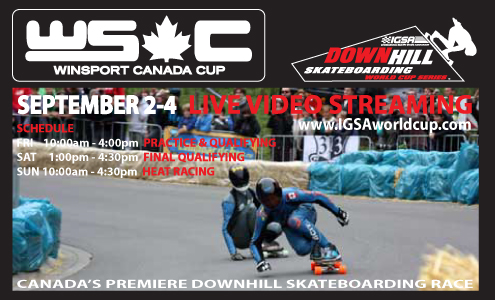 Calgary, Canada – This weekend, September 2-4 www.IGSAworld cup.com will be featuring live streamed coverage of the Winsport Canada Cup from Canada Olympic Park in Calgary, AB, Canada. The event is round number five of the 2011 IGSA Downhill Skateboarding and Street Luge World Cup Series.

Downhill racing enthusiests from around the globe will be able to catch all the action on their computers at home and on their mobile devices wherever they may be. This is a ground breaking event that promises to set the precedence for Downhill Skateboarding and Street Luge event coverage in the future.