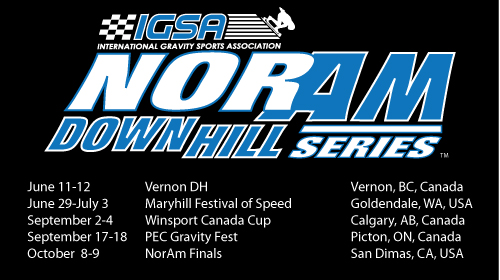 Petaluma, California – The IGSA is pleased to announce the 2011 IGSA NorAm Downhill Series.  Five North American events will make up the inaugural season with races in Canada and the United States.

The NorAm Downhill Series will be comprised of both World Cup and Continental level races however all five events will award the same number of points to the winner.  Each riders’ best four finishes will count toward their season points total.  Champions will be crowned in each division at the final race of the season.

IGSA President Marcus Rietema said, “With the growth and success of the IGSA World Cup Series, more and more events have expressed a desire to become a part of it.  The demand for World Cups has exceeded what the IGSA can supply.  With the launch of the NorAm Championship, more events can be part of a meaningful IGSA Championship.  Competitors who may not have the resources to go after the World Cup Series Championship can now stay on the Continent and race for the NorAm Series title.”