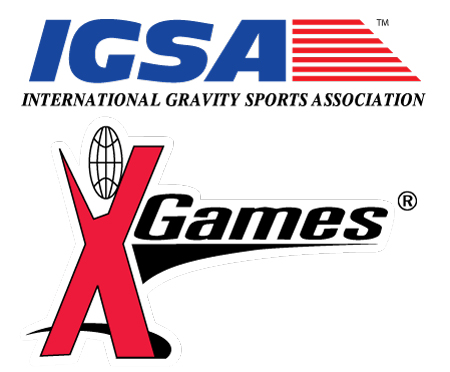 Petaluma, CA- Come take a walk down memory lane with us to the beginnings of the IGSA. Street Luge had been a hugely popular event at the inaugural 1995 Extreme Games that were  held in Providence Rhode Island.

In 1995 there was a lot of political fighting going on between the Federation of International Gravity Racing (FIGR) and the Road Racers Association for International Luge (RAIL). RAIL was organizing the X Games and FIGR was running a series of races in Southern California. At that time the only way a rider could earn a place to compete in the X Games would be by invitation. If you were not on the RAIL "good guy" list you were not going to race the X Games. There were a lot of really talented racers competing in the FIGR series that were not invited to the 1995 X Games because of their affiliation with FIGR. These were people like Perry Fisser and Darren Lott. Many felt suspect things were happening regarding rules, timing and fair officiating.

In the Fall of 1995 Marcus Rietema, Bob Ozman, Darren Lott, Alec Schroeder, Ted Schroeder, Perry Fisser, Laurie Fisser, Ron Amos, Brad Strandlund, and Stephanie Barger began having weekly meetings to start a new organization. After a couple of months the group realized that they were going in two different directions with their ideas so they decided to split into two groups. Ozman, Lott, the Schroeder brothers, Stephanie Barger and Marcus went ahead and formed the IGSA. The Fisser's, Strandlund and Amos picked up the pieces of FIGR and started Extreme Downhill International (EDI). Not many people know that both EDI and the IGSA had their beginnings at Marcus' kitchen table! 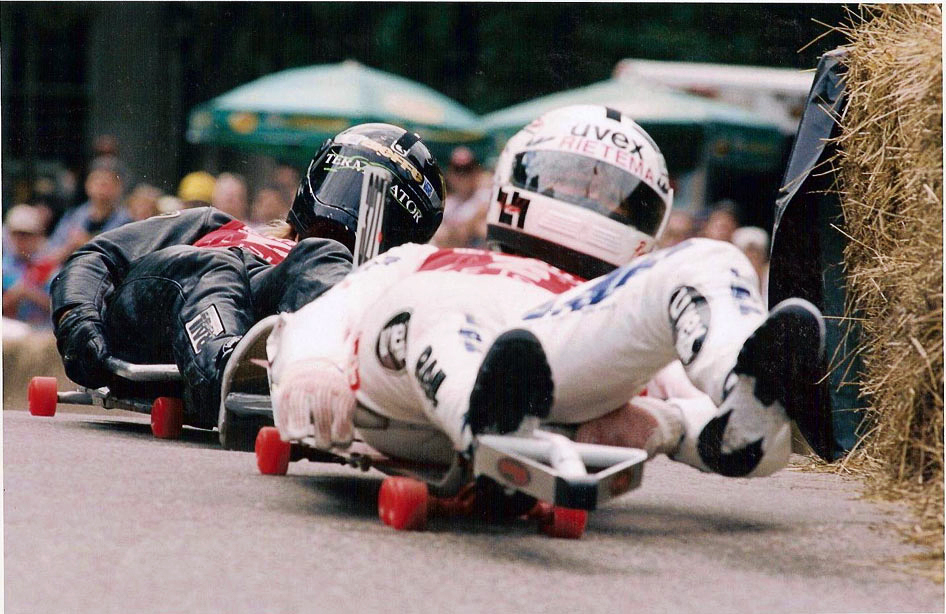 Marcus Rietema competing in the 1996 X Games while layng the foundation for the IGSA.  Photo Providence Daily Journal
The IGSA group kept working on their new sanctioning body sporadically through 1996 while most of them kept competing.  In late 1996 word got out that ESPN was looking for a new Street Luge organizer.  They were unhappy with the current organizer so their contract wasn't renewed after the 1996 X Games.  In early 1997 Marcus was hired by the X Games to be the new Street Luge Sport Organizer and the competitions would be sanctioned by the IGSA.  For the 1997 X Games, the IGSA worked with RAIL, EDI, and Hot Heels to invite their top five riders. Marcus organized an IGSA sanctioned Open Qualifier in San Bernardino, CA to fill the remaining spots.

On May 2-3, 1997, the IGSA San Bernardino Grand Prix gave anybody in the world the opportunity to qualify for the X Games!  The event was a big success with a huge (at the time) field of 44 Street Lugers competing for the 32 available invitations.  Dual (2-man) and Mass (4-man) races were held with points being awarded based on placement in each.  The combined points of the two races determined those who qualified for the X Games.  Riders who were already qualified for the X Games could not race in the qualifying races but a seperate Super Mass Pro Race (6-man) was held that was open to everyone.  Bob Ozman won the Dual Race that day and Sean Mallard won the Mass.  Todd Lehr was the winner of the Super Mass Pro Race. 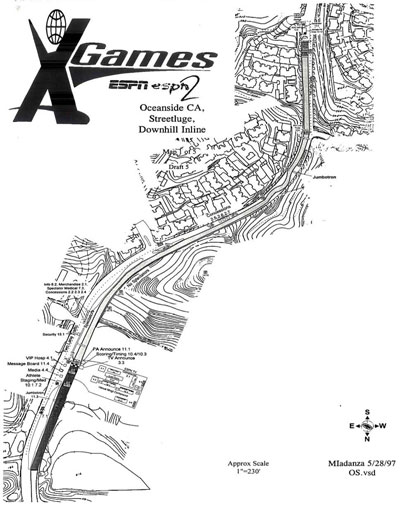 Oceanside, California was the site of X Games III June 18-23, 1997.  The course was relatively straight, flat and no one was happy with it.  A much better course had originally been scouted in La Jolla, CA but once residents of the affluant neighborhood got wind of ESPN's plans, they raised a public outcry and killed it.  A chicane was constructed in an attempt to make the course more challenging but not much could be done to make the road better.  Chris Ponseti won the Super Mass race while Biker Sherlock was the winner of both the Dual and Mass events.

Marcus went digging through his archives last December and located the hard copies of all the results from these first two historic IGSA events.  Bob spent many hours inputing all the data into the modern formats to preserve the important pieces of downhill racing history for everyone to enjoy.  Over the next year they'll be working to post more results from the IGSA's formitive years.  We hope you enjoy them.
Teolo World Cup
Big Air Street Luge
2002 Big Air History