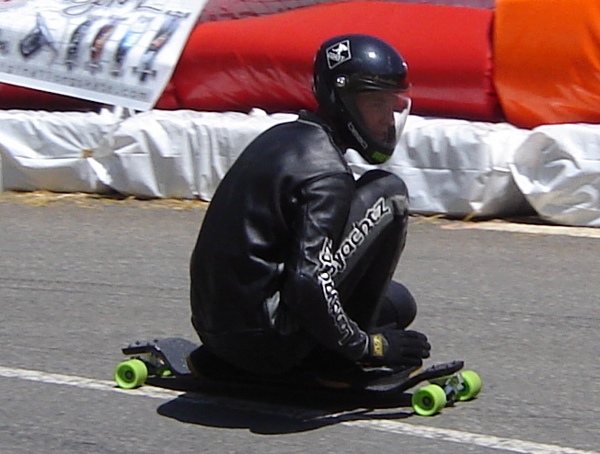 Erban, who was narrowly beaten by Sweden's Erik Lundberg at last year's Hot Heels Africa World Cup event in Cape Town, South Africa, has made his intentions clear for 2008 with an early registration into Newton's Playground. Erban is chasing his first World Cup Championship and with vital World Cup Championship points on the line at Bathurst he cannot afford to miss the event. By registering, Erban effectively throws down the gauntlet to Lundberg who, according to IGSA President Marcus Rietema, is currently considering his options.

World # 4 ranked Speedboarder, USA's Noah Sakomoto has also registered to make the trip to Newton's Playground heaping added pressure on Lundberg to front up downunder to defend his crown.

Since competitor registrations opened on 28th November 2007, organisers have been overwhelmed with the response with a steady stream of applications being received each week.

Downhill Skateboarding competitor numbers are capped at 60 and to date 32 are registered. Competitor registrations close on 1st February, 2008 and event organizers are expecting a last minute rush from competitors to fill the remaining spots.

Competitors will have little time to familiarise themselves with the Mount Panorama circuit with practice to take place Friday morning 7th March and qualifying during the afternoon. The section of the circuit that the Speedboarders will compete upon takes in The Esses, The Dipper, Forrest's Elbow & almost half of Conrod Straight all up 1.5 kilometres of terribly treacherous tarmac.

President of the International Gravity Sports Association (IGSA), Marcus Rietema said he has been pleased with the response so far from international competitors and expects now that the high profile athletes are confirmed, more should follow suit and make the trip out. "It will be exciting seeing the world's best downhill racers competing against the fast Aussie locals", Rietema said. The IGSA who are the world's governing body of gravity sports have provided World Cup sanctioning to the inaugural Newton's Playground festival making it one of only six World Cup events in 2008. "The sporting disciplines will certainly showcase some of the finest talent from around the World", said Rietema.

The other five IGSA World Cup events scheduled for 2008 include:

The Downhill Skateboarding/Speedboard event is but one of a host of other gravity fuelled sporting disciplines featuring at Newton's Playground. Other IGSA World Cup events include Street Luge and Gravity Bikes alongside Slalom Skateboarding, Mountain Bikes, BMX, Miniramp Skate, Wakeboarding, Wingsuit Flying & Swooping.

A huge all Australian live music lineup will feature across the course of two days on the Skyline Stage featuring headline act Grinspoon along with Gyroscope, Urthboy, Kid Kenobi, the Funky Punks, Tonk and heaps more.

Tickets are now on-sale for Newton's Playground exclusively through Moshtix. Interested spectators can purchase online ({mosimage}), by phone (1300 GET TIX (438 849)) or through any Moshtix outlet.

All event & ticketing information can be found online at: www.newtonsplayground.com.

Spectators are encouraged to book early as there is a strictly limited capacity.