32 of the world’s fastest skateboarders will race wheel-to-wheel in four-man heats on the first day of the Sea Otter Classic. The legendary road course, set in the hills above the Monterey Bay, will provide a spectacular backdrop for a Downhill Skateboarding event. With a $5,000 purse on the line, and a limited, invitation-only field, the on-track action guarantees to be exciting and fast! 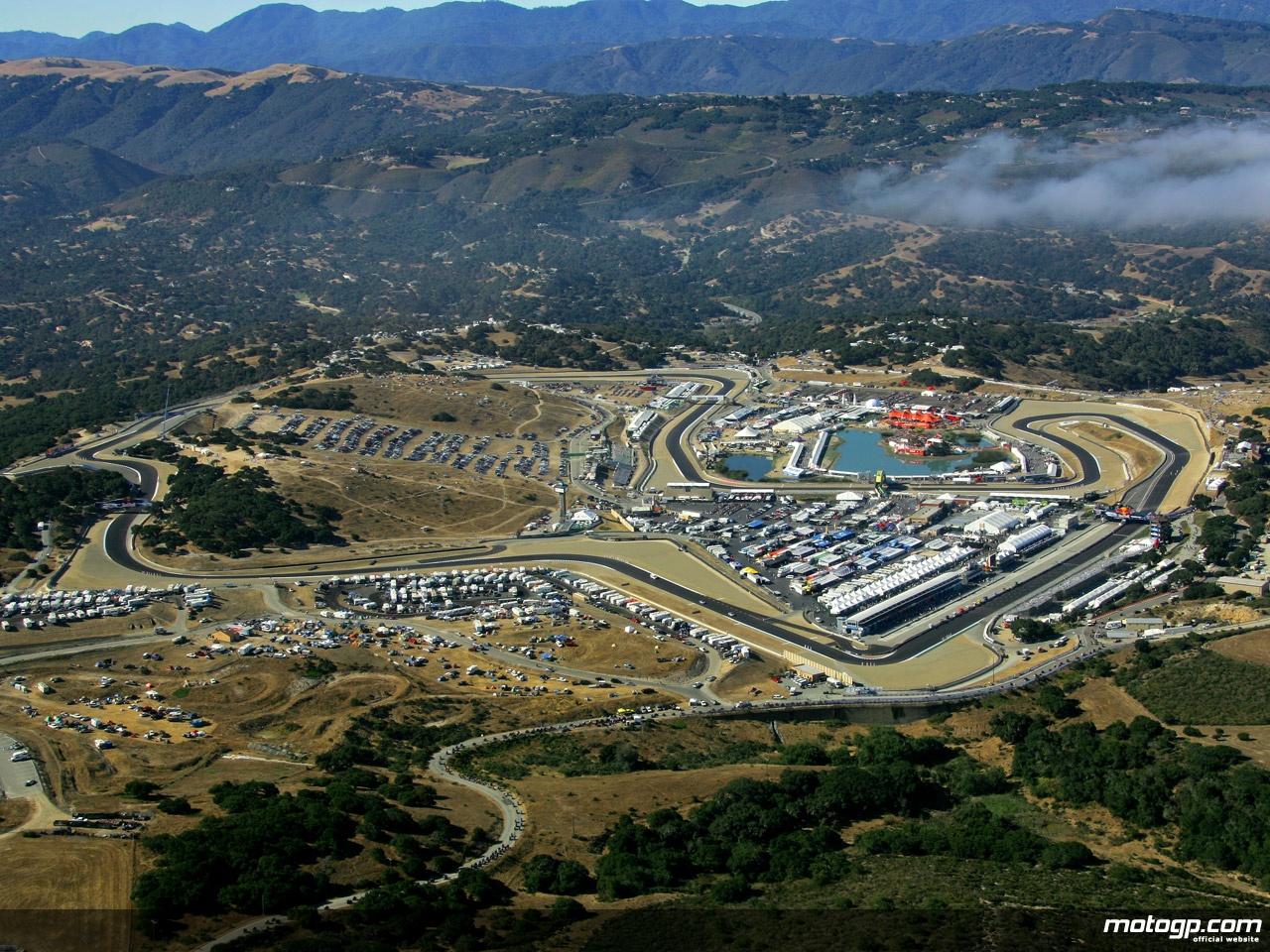 The Laguna Seca Invitational will take place on Thursday, April 19th during the Sea Otter Classic cycling festival. Celebrating its’ 22nd year, the Sea Otter Classic is a four-day “Celebration of Cycling” that welcomes nearly 10,000 athletes and 50,000 race fans and other bicycle enthusiasts. Legendary skateboarding company NHS (Road Rider, Independent, Santa Cruz, Flip, Crux, Creature, OJ and more) worked with the Sea Otter organizers to develop the event and secure the venue. The IGSA has come on board to organize the competition. The current plan is to run from the top of the Rahal Straight, down through turns 6 and finishing just past turn 5. An alternate course incorporating the infamous “Corkscrew” is also being considered. An announcement on the final course will be made in the coming weeks. 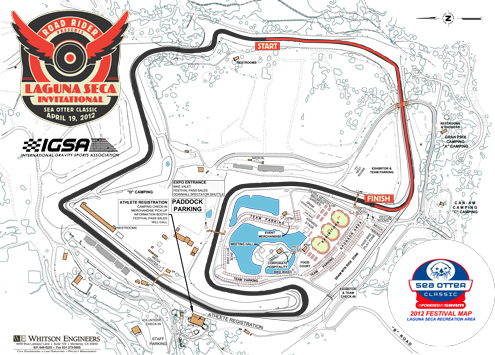 Click on the map for a printable pdf version
Spectators can take in all the action by purchasing a Festival Pass. Festival Pass prices are as follows:
• Children age twelve and under, free all week.
• Registered athletes (both competitive racers and Gran Fondo recreational riders), free all week.
• All others age thirteen and up: $10 pre-purchase ($12 on-site) for a One-Day Festival Pass or $30 pre-purchase ($35 on-site) for a Four-Day Festival Pass.
Discounts are available for some teens and adults: two passes may be purchased for the price of one by members of the military (active duty or retired) and by members of the same family. For these, purchase your passes on-site; photo identification will be required. On-site Festival Pass sales, April 19-22, 2012, at:

Due to time constraints and to ensure the highest quality field possible, the Laguna Seca Invitational is being capped at 32 entries. Invitations are going out based on 2011 IGSA World Cup Series points, Former World and World Cup Series Champions, NorAm Series points and top finishers from 2011 World Cup and NorAm Series events. The entry fee for this professional event is $70. Riders will be competing for their share of a $5,000 purse. An initial invitation list of 41 competitors will be issued on January 31st. Invitees will have until Friday, February 17th to respond and pay their entry fees. Beginning on Monday, February 20th invitations will go out for any remaining spots in the order listed until all 32 spots are filled. 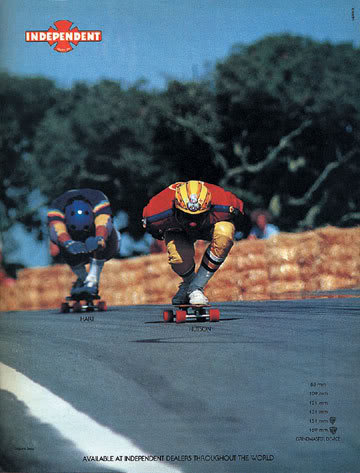 John Hutson was the last winner at Laguna Seca back in 1980.  Photo Independent Trucks
The first downhill skateboarding race at Laguna Seca was held on September 20, 1980.  Legendary downhill skater John Hutson was the winner that day followed by Paco Prieto in second, Roger Hickey in third and Mike Goldman in fourth.  Check out the Thrasher Magazine January 1981 issue for full race coverage,

The last Laguna Seca downhill race was held on July 12, 1981.  On that day Roger "The Kid With No Respect" Hickey turned the downhill racing world upside down when he beat Hutson in a stunning duel to the finish.  Rick Fike finished third and Mike Goldman was fourth for the second consecutive year.  Thrasher Magazine August 1981 had the full race coverage. 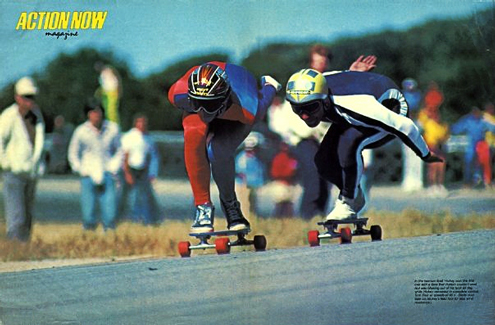 Invitations will be sent out to competitors using the following criteria in order:

Open spots remaining after the initial 41 invitations will be filled in the following order:

Laguna Seca Invite List
If you are on the initial list of 41 riders and would like to register for the event, please email This email address is being protected from spambots. You need JavaScript enabled to view it. to confirm your attendance and pay the registration fee.

Competitor check in and a mandatory tech inspection will take place in the morning. An autograph session is being arranged to give spectators a chance to meet their favorite racers. A one-hour practice session will take place from 1:00-2:00pm enabling the riders to get acquainted with the course and dial in their equipment. Single run, timed qualifying will take place from 2:15-2:45pm to set the field for the Laguna Seca Invitational. Racing will begin at 2:00 pm with 32 riders in four man heats racing in a single elimination format. The top two finishers in each heat will move on to the next round. It will all come down to a four man final to determine the winner of the inaugural Laguna Seca Invitational.

See you in Monterey!