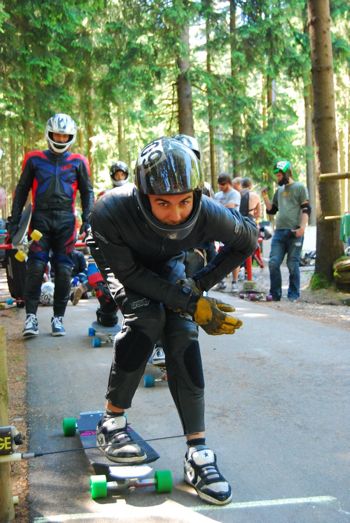 Sebastian Hertler on the line for qualifying.  Photo Stephan Risch
Sebastian Hertler won Downhill Skateboarding at Round #1 of the 2009 König der Berge Cup (King of the Hills Cup) in Lohnsburg/Kobernaußerwald, Austria.  The 2009 Series begin this weekend, May 23-24.  It was organized by Gravity Sports Austria (GSA) and sanctioned by the IGSA with Regional status. 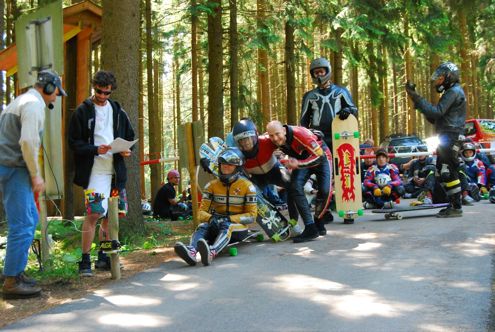 Klotzberg, Serek and Frischauf having fun before the start of qualifying.  Photo Stepahn Risch
40 racers arrived on Saturday morning at 10:00am and had a super weekend with endless freerides and great race !!!  They had about 12 runs before lunch on the very nice 1200 m long race track with four hairpins and a top speed of 50 km/h.  After lunch they ran time trails with Sebastian Hertler dominating the field followed by Stephan Risch in second and Max Stamler third.  After the time trails the riders were stoked with another ten freerides!  After the day of practice and qualifying, the organizers provided free dinner for all the participants at a nearby restaurant.  After so many runs during the daytime, most of the riders went to bed early to be rested for race day. 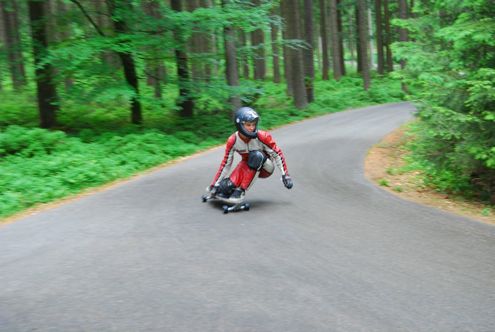 Judith Richter on her way to winning the Women's DH Race.  Photo Stephan Risch
On Sunday morning the road was a little bit wet from an overnight rain.  By lunch, it was drying so more riders began taking practice runs to prepare for the race.  The racing started right after the lunch with the Women’s Downhill Skateboarding competing in a GP format.   Judith Richter from Germany earned the win followed by Anne Kaske in second and Maike Westerlich in third.  Daniella Haller missed the final heat after suffering a crash. 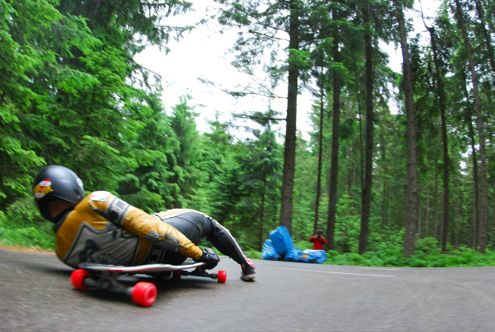 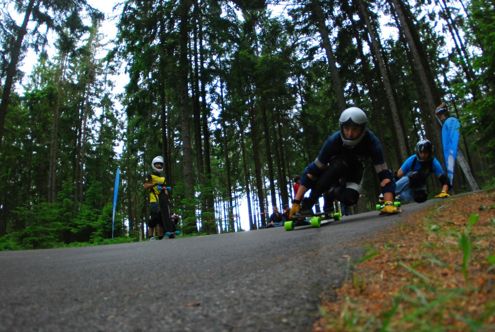 2nd place finisher Max Stamler leads 3rd place Tom Dammann.  Photo Stephan Risch
The final event of the day was the Downhill Skateboarding race that had a strong field of 29 competitors.  The race was filled with young, fast up and coming racers.  Michael Serek turned a lot of heads with an impressive fourth place finish.  The two-time IGSA World Champion Classic Luge racer seems to be as comfortable standing up as he is laying down!  Newcomer Tom Dammann passed veteran Stephan Risch in the Semi-Finals to earn a place in the finals.  Also in the finals were Sebastian Hertler, Max Stamler and Michael Serek.  Hertler dominated to earn the win followed across the line by Stamler, Dammann and Serek. 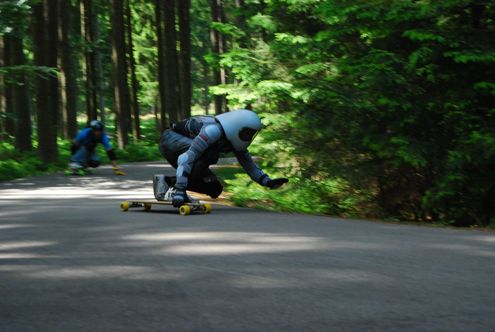 Classic Luge World Champ Michael Serek finished 4th in his 1st ever DH Skateboard race.  Photo Stephan Risch
The first round of the 2009 König der Berge Cup was a great event and the perfect way to kick off the season.  Special thanks go out to organizer Alex Frischauf and his entire crew.  Round #2 is scheduled for Jun 13-14 in Ramsau/Dachstein, Styria, Austria.  The event will be the opening of the epic Fluderer track!  For more information go to www.GravitySportsAustria.org. 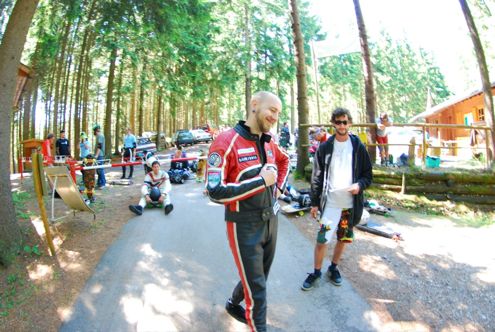