Sebastian Hertler makes it two in a row!

Sebastian Hertler on his way to winning round #2 of the König der Berge Cup.  Photo Stephan Risch
Ramsau, Austria- On a hot and sunny weekend in Ramsau, Austria, Sebastian Hertler overcame the heat to score his second win in a row at the Fluderer Longboard Opening.  It was round #2 of the König der Berge Cup 2009 held June 13-14.  His teammate Dominik Kowalski was second as the two Pavel-GOG riders dominated the entire weekend.  The Ramsau course is 1.4 km (.9 mi) long with a maximum speed of 70km/h (43 mph).  It’s a fast, very crazy, super fun road with a few banked corners. 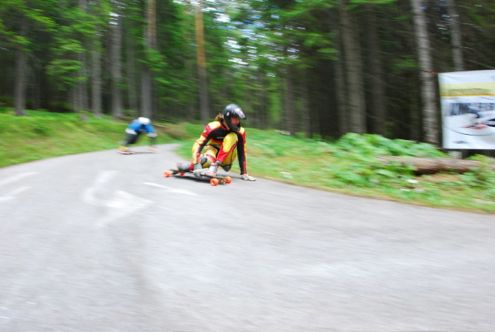 Alex Dietz won the Consolation Final to earn 3rd place.  Photo Stephan Risch
Racers arrived throughout the day on Friday to the lovely ski resort in Ramsau, Austria. They were greeted by perfect weather conditions for the weekend.  Those who arrived early enough were able to get in some practice runs. Like Lonsburg, the race was once again held on a biathlon training course.  The event was organized by David Reinthaler. In the evening more and more riders arrived and they had nice time talking and saying hello to everybody. 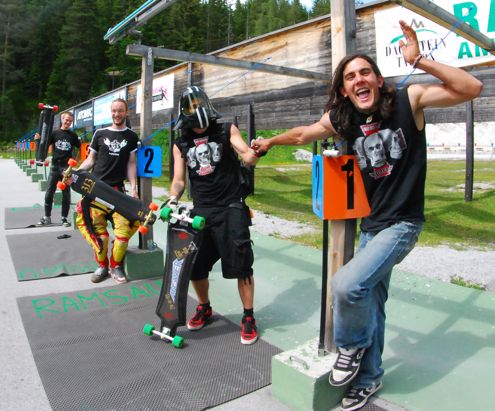 Sebastian Hertler enjoying the weekend in Ramsau.  Photo Stephan Risch
Saturday morning began with a little rain but the road was dry by 9:00am and practice was held until12:00 noon.  After some minor problems with the radios, the time trails began.  Sebastian Hertler and Slalom World Champion Dominik Kowalski were dominating!!!  After the first run it was Kowalski first, Hertler in second and Stephan Risch third.  In the second time trail run, the two Pavel-GOG riders put on their aerohelmets to see if the could improve.  Hertler went four seconds faster in his second run!!!  Everyone in Germany and Austria can’t wait to see him skating this year against the top ten riders in the IGSA World Cup Series! 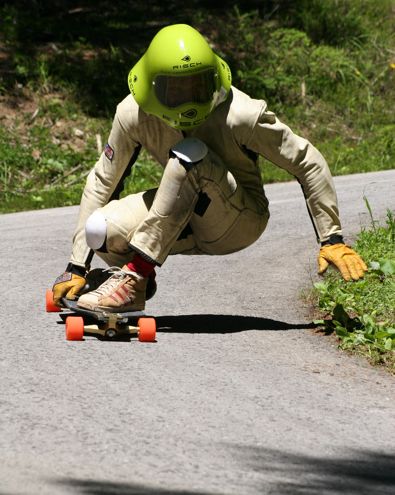 Stephan Risch loving his new ride enroute to 5th.  Photo Hackbrett
After the time trails were finished, many riders took a swim in the nearby lake to cool off.  During the afternoon session everybody took turns skating on the set ups of the other riders.  It was very interesting.  In the evening the organizer invited everyone to the restaurant next to the campground.  The riders enjoyed a perfect dinner and a few beers while watching a movie from the last Regional in Lonsburg followed by a photo presentation of the race.  Tired from the heat and lots of walking, most of the riders went to bed early so they’d be prepared for race day. 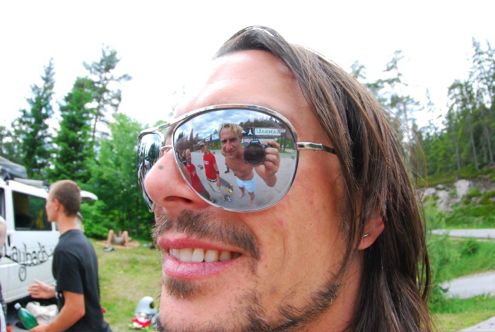 Michael "The Flying Dentist" Serek is racing both in DH Skateboarding and Classic Luge this year.  Photo Stephan Risch
A temperature of 30 C (86 F) on Sunday morning ensured a long, hot day of hard racing.  The Downhill Skateboarding heats were all very tough after the first round.   Skaters many thought would go further like Max Stammler, Michael Serek and Tom Damman were eliminated in the first round. In the Consolation Final with Jakob Raab and Alex Dietz were very close.  Sebastian Hertler and Domenik Kowalski were flying down the track and dominating like they were from outer space.  It was really fun watching these two talented skaters racing down the hill.  Both of them showed up with the new GOG trucks and rode them like slalom boards with super loose hangers while pushing it to the maximum.  In the end it was Hertler earning the win with Kowalski in second and Alex Dietz in third. 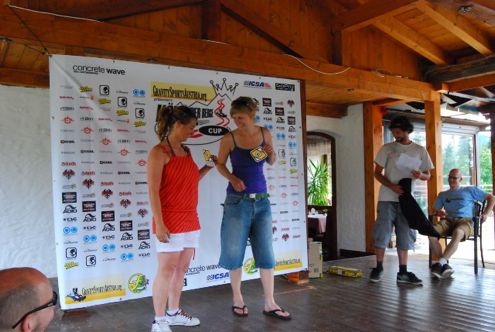 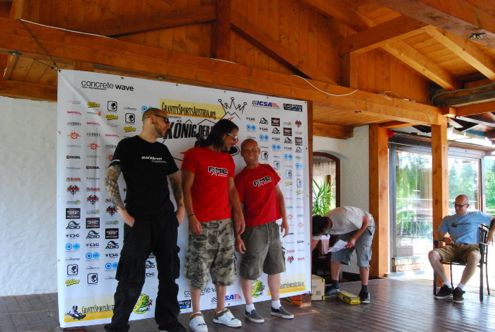 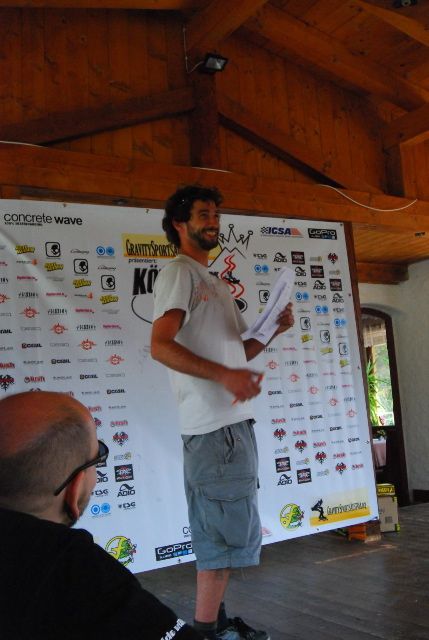 David Reinthaler did a really nice job organizing the event.  Photo Stephan Risch
The whole weekend was very relaxed and very well organized.  Fee from the Hackbrett Longskates shop was at the race with demos of all their new products. Round #3 of the König der Berge Cup 2009I is scheduled for August 8-9. The race will also be the 2009 IGSA Austrian National Championship.