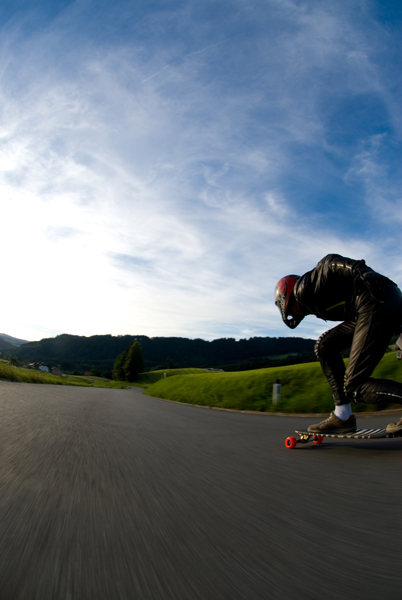 Unfortunately there is a lack of vocabulary for describing that amazing feeling of riding a board – to pass through a landscape sideways. Let’s put the topic more in detail; when you’re tweaking a slide through a sloped corner when the speed, which is pretty high, makes the back wheels slide so far out that you almost hit the hail bails and get thrown off.

In the last moment you manage to save yourself from crashing, and instead you huddle up in your tuck and catch up the speed. Do I need to describe this further? This article is not meant to be a frequent race report, but written as a tribute to the beautiful sequences of downhill skateboarding, and above all – with grace to all the event organizers out there. 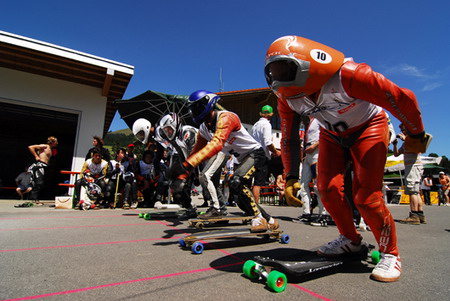 Can words describe how this feels?

Downhill races are made by and for the riders. The organization consists of a couple of skateboarders and their dearest friends. None is paid and some of them sustain loss after the event. So what is the carrot then?

Stephan Risch and Yorck Dertinger started to organize races around year 2000, but the success came 2004 in Auerberg. It was a huge event, almost as big as the legendary Hot Heels, thanks to their sponsors who had put in a lot of money. In 2005 they changed the road to Jungholz, on the border of Germany and Austria (by the way, isn’t it pretty glorious to kick up speed and slow down in two different countries?) and without the same support from financial sponsors they put up another great event on IGSA’s race calendar. Both years, Almabtrieb carried the title World Championship, so it did this year. According to them both, it is all about having fun. But honestly, they are the only organization team in the sport who has IGSA Marcus Rietema’s fully confidence in setting up successful events year after year. I guess they also feel a little bit responsible, or rather honored to do this for a week each year. All the riders are very grateful of course, but event organizing is a pretty filthy job, even if the final day with world class skating and a world class party are the best possible compensations. Then it is all worth the hard work.

To finally be in Jungholz is also worth all the complications to get there. Situated south west of Munich, Jungholz is easily reached for people in cars, but all the Brazilians, Americans and South Africans have a long way in front of them before they, after a couple of flights, a train, a bus and maybe also a hitch-hike, can see the wonderful road winding down the hill, as if it was constructed only for this event! This year, the organization team introduced an advantage for these people, traveling from far away.

We have a discount on the entrance fee for all the Brazilians, Americans and South Africans. It’s a kind of motivation, and makes it easier for them to come to the European events. We are very happy to have them over. 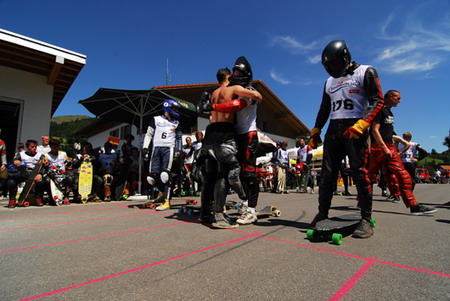 Today, groups of people are not hanging around separately anymore. The world championship in downhill skateboarding is like a meeting of United Nations, where you can learn different styles of skateboarding. Everybody has their own technique to get as fast as possible down the hill. Some people ride very clean, as if they learnt skating by reading a “how-to-speedboard”-book and some others skate with a very personal style which is as fast as the examples from the book. Downhill skateboarding is a fascinating sport, or maybe lifestyle. The riders’ backgrounds and interests differ a lot from each other. One guy is a chef for a well-known restaurant in his city where he lives with his wife and their two sons. Another guy is spending his afternoons after school on a surf board, since he lives on Hawaii. In other words, you cannot take anyone for granted, but they are all unified as friends, or enemies, in Jungholz, for skating down the hill and to determine who is doing it best. 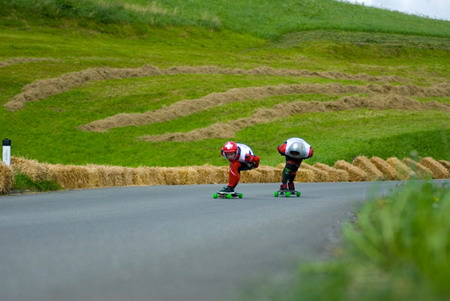 I arrive in Jungholz at about five o’clock in the after noon. A lid of heavy clouds covers the sky and the rain has already transformed the camping ground to a swamp. “What a nice weather!” is the first thing that pops out of Stephan Risch’s mouth. Ironic, but happy to see me again. (quote darryl freeman) I chat a bit with the other organizer, Yorck Dertinger. Over 160 riders in scripted for the race. A big party tent is assembled just a glance from the race course. A bunch of brave men are helping them to dig and prepare everything for the event. The following day the riders are due to arrive. Expectations are always high for a world cup event, but on the other hand it is hard to fail on this one; here we got a perfectly paved road with a hard-breaking zigzag corner section which brings out action for the riders as well as for the spectators. But, as all of us know, “the race is only a reason for the party”, maybe not true?

Anyway, Stephan and Yorck are well-prepared. The beer is on stock. A stage is built and the music system is installed. A catering firm helps them to set up a temporary kitchen where they will serve all the hungry skateboarders during the week. Stephan and Yorck drive back to the course where they are putting up the hail bails. The security is faultless. Everything seems to get along perfectly. I leave them for a while and take a drive up to the top of the hill and down again; all the memories from 2005’s competition come back. Nerves and adrenalin. Bruises and scratches all over my body. Pure happiness.After days of rain, the weather forecast warned for the hottest day in Austria’s history ever this weekend. In between the runs, some riders hung out to watch how the others cut the corners. Erik Lundberg (Sweden) gave his comment on what he thought about Fredrik Lindström’s shape (Fredrik who had no.1 at the world ranking last year): - Well, he’s trying things out. He would like to take the corners entirely without any foot breaking. 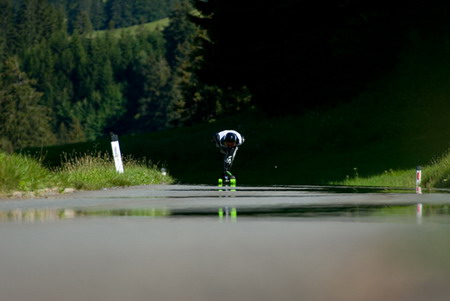 I laughed to myself. The progression in this sport is amazing. By trigging each other, the limits are constantly pushed. In 2005 we witnessed a lot of crashes, also some hard ones, in the first right-hand’. This year, nobody fell – until the qualifying started. It is natural, but funny in a way, how the nerves get you out of focus, or maybe too focused. Swearing and hands in the air, but a bunch of riders coped with the difficult corner section very well and did not crash at all. Bassi Haller (Germany) got the fastest time closely followed by Mischo Erban (Canada). Angelina Nobre (France) had the fastest time among the girls with a gap on 4 seconds before Jolanda Vogler (Switzerland). Everything acted to escalate for thrilling finals the following day. None could say who would be the winner though so many riders represented fast and technically stable skating. However, race is race.

The world championship’s task is to judge who the fastest rider in the world is, and IGSA is supposed to help thanks to their rule book which clears things out concerning pushing after corners, knees on the board etc. After the men’s final, a discussion appeared since a couple of riders had broken some of the rules which caused new conditions during the final heat. Marcus Rietema decided to strike out the dispute since he did not have any reliable proofs for what happened. Now afterwards, pictures can proof that the IGSA’s rules were broken and maybe a couple of riders should have been discriminated. Marcus Rietema’s comment at the final day: - Obviously the level of skateboarding improves so quickly that we need to up date the rule book. Next time, I will announce the rules very clearly before the race so something like this will never appear again. 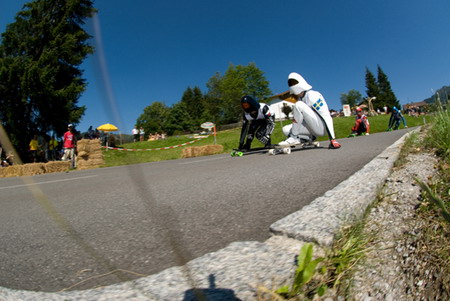