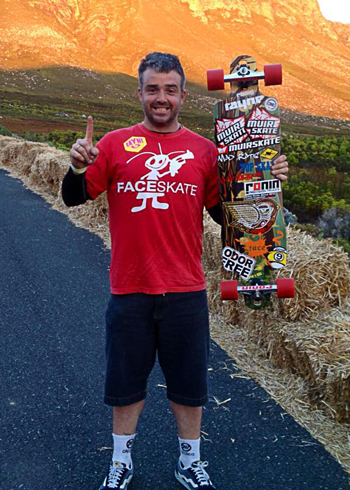 Finishing in second place was Kyle Wester from the United States.  Wester has come on strong late in the season with a win at last months World Cup in Teutonia, Brazil followed by his strong showing in South Africa.  He's clearly established himself as one of the premier talents in the sport.  Adam Persson from Sweden earned the final spot on the podium.  Radek Lukes made his first final round appearance in a IGSA World Cup race and wound up fourth.

The Open Downhill Skateboarding race was marred by an accident involving Felipe Malaga from Peru.  The accident happened during the second semi final heat at Lloyd's Left, which is about one third of the way down the course. Felipe apparently ran wide on exiting the left hand corner and either him or his wheels clipped the hay bales. This caused him to be spun around at high speed with the side of his head being whiplashed against the tarmac.  He underwent surgery last night to relieve pressure on the brain. The neuro surgeon gave a more optimistic prognosis afterwards. He is now in a stable but critical condition and is being attended to by one of the best specialists in Cape Town. Felipe is hospitalized in the Vergelegen Medi Clinic in Somerset West, 15 min from Kogelberg. His girlfriend is with him.  We will give further updates on his condition as it becomes available.  Our thoughts and prayers go out to Felipe, his family and friends for speedy and full recovery.

Open Downhill Skateboarding
1. Douglas Silva, Brazil
2. Kyle Wester, United States
3. Adam Persson, Sweden
4. Radek Lukes, Czech Republic
Gemperle Clinches the Women's Title
Rebekka Gemperle from Switzerland topped off a great year by winning Hot Heels Africa for the second year in a row.  Rebekka scored four World Cup victories in 2012 including the IGSA World Championships in Calgary along with wins in France and the Czech Republic.  She also had a second place finish at the USA round of the World Cup.  Tamara Prader was second and Gabi Murray-Roberts was third.

Women's Downhill Skateboarding
1. Rebekka Gemperle, Switzerland
2. Tamara Prader, Switzerland
3. Gabi Murray-Roberts, South Africa
4. Anni Lindenmaier, Germany
Keinan Dunn Wins Junior I
Kienan Dunn from South Africa was the winner of the Junior I race.  He was followed by fellow South African's Nicholas Taylor in second, Miles Kenmuir in third and Ryan Morris in fourth.  Greg Paproski from the United States clinched the Junior I World Cup Series Championship for competitors between 8 and 13 years old.
Junior I Downhill Skateboarding
1. Kienan Dunn, South Africa
2. Nicholas Taylor, South Africa
3. Myles Kenmuir, South Africa
4. Ryan Morris, South Africa
Finnochio Wins the J-II Race and Championship
Quin Finnochio won the Hot Heels Africa Junior II race for competitors 14-17 years old and clinched the Junior II IGSA World Cup Series Championship in a hard fought battle with Brazilian Jonas Richter.  Coming into the race, Finnochio had a narrow lead over Richter in the points battle.  Both racers were in a position where they were dropping points from their worst finishes.  If Richter could win the race, it would have forced Finnochio to finish in second to retain the points lead and win the Championship.  Anything less than a win would not be enough for Richter to overcome Finnochio no matter where Quin finished.  After Richter qualified first and Finnochio fourth, it certainly must have left Jonas feeling confident and Finnochio nervous.  In the end it, the Series Championship came down to the final heat.  Finnochio won and solidified his 2012 IGSA World Cup Series Championship.  Richter was second and finished the season in second place.
Junior II Downhill Skateboarding
1. Quin Finnochio, Canada
2. Jonas Richter, Brazil
3. Camden Lategaan, South Africa
4. Murray Du Preez, South Africa
Eliot Wins In Classic Luge
Veteran racer Peter Eliot from Great Britain was victorious in the Classic Luge race.  He was followed by Glen Phillips from South Africa in second and Nic McKirdy from Australia in third.  American Frank Williams clinched the 2012 IGSA World Cup Series Classic Luge Championship.