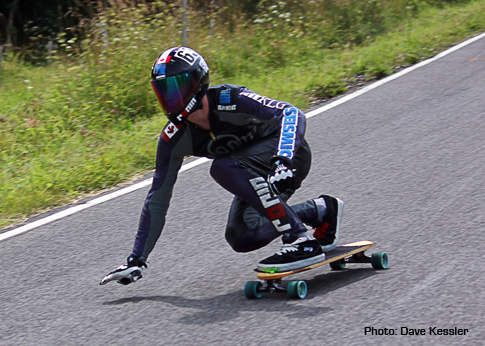 Junior II rider Quinn Finnochio was the surprise of the day with the 5th fastest time.

Kozakov-Semily, Czech Republic - After dominating the 2011 Kozakov Challenge and earning his first World Cup victory of the season earlier this month in the USA, Patrick Switzer showed he is still in top form leading the first day of qualifying in the Czech Republic.  Alex Tongue, who was the winner of the first World Cup of the year at Mt. Keira, Australia currently sits in the number two spot.  James Kelly who's had a strong season so far currently sits in the number three position.  Kevin Bouaich from Switzerland put in an impressive run provisionally earning the number four starting position.

Goldendale, WA, USA - In an exciting final qualifying session , Zak Maytum was able to grab the pole position away from Douglas Silva while setting a new track record in the process. The 2010 Maryhill Champion from Boulder, Colorado used a slalom board to slice his way down the 3.5 km course posting a time of 3:05.523. His effort enabled him to jump up nine grid positions while every other skater in the top six was unable to improve on their times set on Friday.